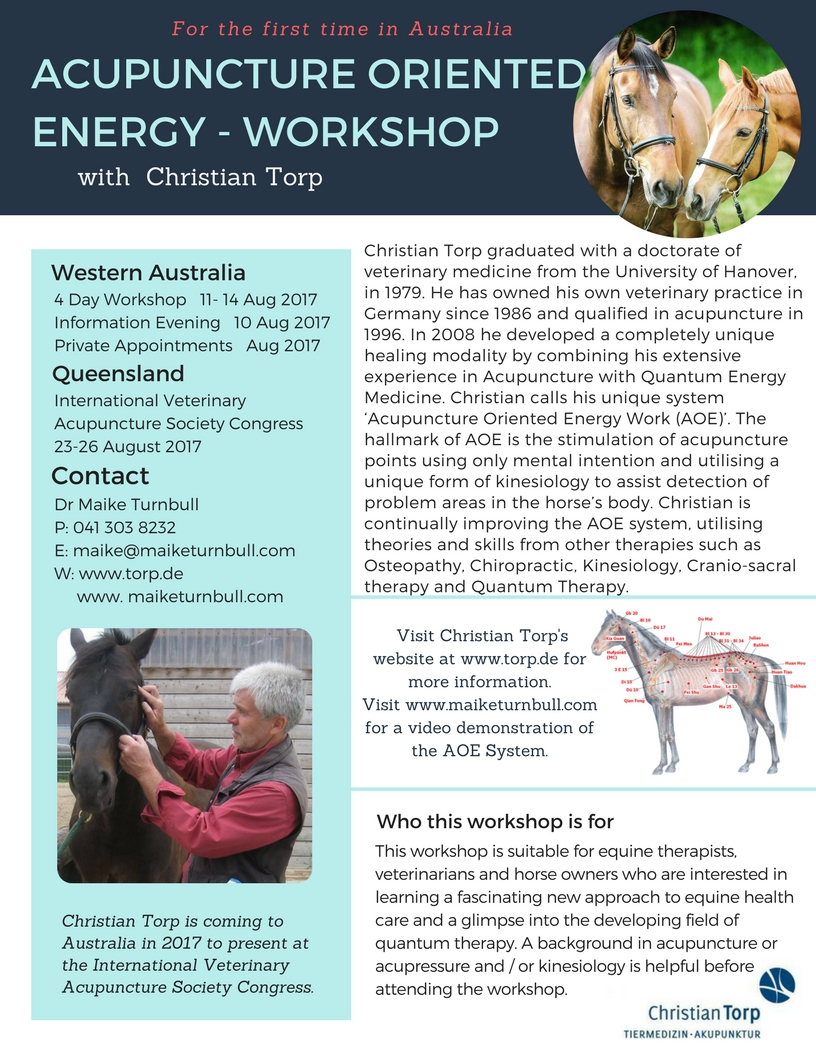 For the first time in Australia!

Who this workshop is for

This workshop is suitable for equine therapists, veterinarians and horse owners who are interested in learning a fascinating new approach to equine health care and a glimpse into the developing field of quantum therapy. A background in acupuncture or acupressure and / or kinesiology is helpful before attending the workshop.

Christian Torp graduated with a doctorate of veterinary medicine from the University of Hanover, Germany in 1979. He has owned his own veterinary practice in Germany since 1986 and qualified in acupuncture in 1996. Christian has practiced acupuncture exclusively since 1999 and since 2009 has not used needles, practicing and refining AOE. The best way to describe AOE is a marriage of traditional Chinese Veterinary Medicine (acupuncture) and Quantum Energy Medicine.

Christian Torp’s experience
At a very early stage in his career Christian recognised acupuncture as an effective alternative and supplement to traditional medicine, in particular during therapy of chronic diseases, but also for preventive purposes. He developed AOE through his extensive clinical experience of acupuncture spanning more than 20 years.
A key feature that distinguishes Christian is his ability to trust his own observations in practice above learned theories. This keen sense of pursuing his own observations, even when these are not able to be explained using current knowledge and theories, has enabled Christian to step beyond the ledge of the known and explainable medical paradigm.

One-Needle Therapy
In 2003 Christian began the use of a method of acupuncture known as one-needle-therapy, based on traditional Chinese medicine. Christian states that he was guided by the idea that all diseases have their source in an imbalance of Yin and Yang and in a disturbed Qi (energy) flow and that the best acupuncture practitioners use only a few or just one needle for treatment. Importantly, Christian focuses on harmonising Qi rather than becoming caught up in how the block in Qi is causing disease.

Christian does not consider himself intuitive or in possession of any particular skills that other people do not possess. In fact, his scientific training means he does not draw a conclusion unless he can produce irrefutable, reproducible and testable results.

The discovery of AOE
AOE was ‘born’ when Christian attended to a patient to perform a routine acupuncture treatment. As he was about to insert the needle into the identified required point, he noticed that the horse he was treating suddenly showed signs of relaxation and endorphin release BEFORE the needle was inserted. Instead of continuing, he became curious and instead of inserting the needle he re-examined the patient to determine what had happened at the identified point (ie. he checked if the energy blockade at the point was still present). To Christian’s surprise, the blockade had been completely resolved.
Christian had experienced that therapy without needles, using mental force only (mental acupuncture) is as effective as the therapy with needles (acupuncture). He began to experiment with this discovery in foals, hind legs of horses and also in humans, realising to his own astonishment that the method worked unfailingly and the needle could be omitted. Amazingly, by omitting the needle it became possible to dissolve other functional blockades in horses, for instance blockades in joints and organs and Christian’s ability to heal his patients expanded. This discovery launched Christian firmly into the fascinating, developing realm of quantum healing.

Kinesiology (Muscle Testing)
In combination with mental acupuncture Christian developed a way of energetic testing (kinesiology) directly on the horse. Traditionally kinesiology is practised on animals using a human surrogate on whom the testing is performed. By testing directly on the horse Christian is able to find hidden blockades and pinpoint effective treatment and is able to identify all sorts of problems in his patients that to date have not been possible to pinpoint effectively.

In Christian’s view a healthy organism does not show any blockade or painful areas. Each point and region in the body should be able to be palpated without any resistance or painful reaction. It is the goal of each of his treatments to achieve this state. In the case of acute diseases, there is of course a role for western diagnostic methods and treatments. The AOE system is used for chronic diseases and in preventative medicine.

What’s next?
As Christian’s work evolved he discovered that the answer to the question “what is healing” might be found in the developing field of quantum physics. Quantum physics is constantly improving traditional Chinese medicine and the old Chinese philosophy, especially Taoism. Christian believes that the future of medicine will be found in quantum healing, deduced from the knowledge of quantum physics. To this end he is focusing increasingly on quantum healing methods such as the two pointing method (Hawaiian method) and QEF (Quantum energy flow developed by Matthias Weber).
Christian’s goal is to search for truth and the complete healing of every patient and he believes that practitioners must possess deep empathy and non-judgment for their patients.
Is Christian able to objectively explain how and why his method works? No. He embraces the subjectivity of his work and in part this is essential in expanding the mind beyond perceived reality and limiting beliefs that stand in the way of achieving true healing. This is supported by the fact that reality is subjective – if you ask 5 experts about a problem you will receive 5 different answers.

For more information and bookings please contact Maike on 0413038232 or email info@amtequestrian.com.au